Below you can find a short description of different sleep disorders. With the exception of insomnia, you need a sleep evaluation in a sleep lab for a correct diagnosis. If you recognise some of the symptoms of other sleep disorders, contact your general physician or a sleep lab near you.

Insomnia is a sleep disorder characterised by sleep onset difficulties, sleep continuation problems, early morning awakenings and/or a non-restorative sleep. There is a clear impact on daytime functioning, such as mood, concentration, attention, fatigue, performance,...
Insomnia patients are often not excessively sleepy, but rather tired. They worry, show heightened levels of arousal or vigilance, and are often stuck in a vicious cycle of worrying about the insomnia, which in turn reinforces the vigilance and sleep complaints. In scientific literature, insomnia is often referred to as 'an arousal disorder' and not so much 'a sleep disorder'.

This sleep disorder is characterised by the cessation of the breathing pattern several times per hour due to an obstruction in the airway. This sleep disorder is correlated with severe health risks, if not treated correctly. It results in a decreased sleep quality, less deep sleep, lighter and fragmented sleep, more awakenings and a decrease in oxygen saturation. Obstructive sleep apnoea can result in high blood pressure, arythmias, cardiovascular diseases, severe mood problems and memory problems. The severe sleepiness during the day is an increased risk for accidents, especially in traffic.

Typical symptoms: severe snoring, excessive sleepiness, concentration and memory problems, going to the bathroom during the night, falling asleep at inapropriate places or times, waking up gasping for air or with palpitations, a dry mouth in the morning, a headache in the morning.

Take the online test at: http://www.stopbang.ca/osa/screening.php

The restless legs syndrome is a neurological disorder characterised by the urge to move the legs when the are in resting position, especially during the evening. This urge to move often coincides with an uncomfortable and unpleasent sensation in the legs. This urge to move or uncomfortable feeling is completely or partially alleviated by movement. Research shows that there is a partial genetic component to this sleep disorder.  It can start at any age, both in men and woman, and the symptoms worsen with age and with sleep shortage.

In this sleep disorder, the limb movements occur during sleep and are characaterised by muscles tensions, spasms or an upworth movement of the foot. These leg movements can give rise to awakenings and as such a more fragemented sleep. This can in turn result in increased daytime sleepiness and fatigue.

Narcolepsy is a severe sleep disorder with a neurological origin. The brain is not capable of maintaining a stable sleep-wake cycle. The wake system is not stimulated correctly, resulting in sudden sleep attacks during the day. This excessive sleepiness is a first typical symptom. People with narcolepsy will suddenly fall asleep during the day, which can lasts for a few seconds or minutes.
A second characteristic is cataplexy, a sudden loss of muscle tone, which is elicited by intense emotions.  This loss of muscle tone can be over the entire body, or only limited to a specific area, such as the nek, the face, the arms or legs. During this episode, the patient if fully conscious! It can seem as if they actually fall asleep, but they are not. They just lose muscle tone en stay conscious. This mechanisme is normally part of the REM sleep, but also activates during wake in Narcolepsy patients.
Hypnagogic hallucinations are a third important characteristic and refer to strange and sometimes freightening dream-like experiences when they cross over from wake to sleep or from sleep to wake. Sleep paralyses, the temporary impossibility to move during the transition from sleep to wake, can co-occur with the hypnagogic hallucinations.
Although this sleep disorder is often characterised by excessive daytime sleepiness, they often wake up during the night and have a fragmented sleep.

Parasomnias are sleeping disorders characterised by unwanted motor, verbal or other experiences during specific sleep phases or transitions betweens sleep phases. Nightmares are a parasomnia often seen in children, but sometimes persist during adulthood. It is characterised by freightening dreams during REM sleep and a vivid memory of it when awakened. Pavor nocturnus, or sleep terror, is characterised by the patient suddenly screaming and jumping into a sitting position and while the body is showing all signs of excessive anxiety. There is hardly or no memory of the dream and this phenomenon is typically present during NREM sleep. Sleep walking is another NREM parasomnia that often starts during school age and the beginning of adolescence. 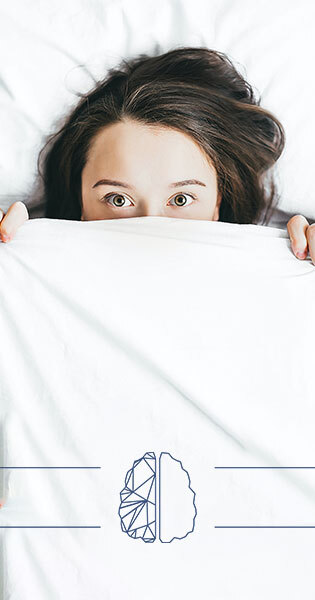